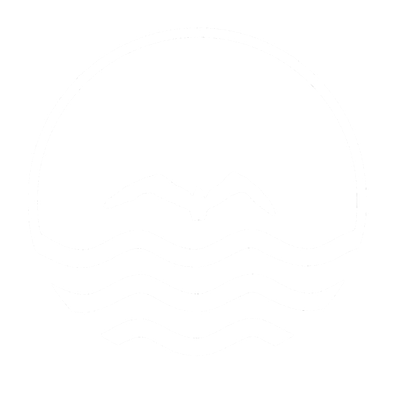 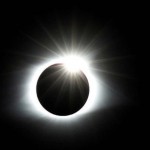 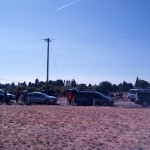 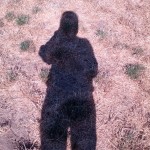 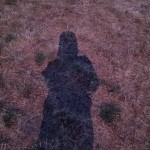 After years of anticipation and days of wondering where best to go, I decided at midnight that the weather looked good for the Willamette valley. I got up at six AM, confirmed the weather, packed up the dog and my eclipse glasses, and headed south on 99E. One-and-a-half hours later, I was in the outskirts of Salem. I had breakfast at a roadside restaurant, where my server wore an ‘Eclipse 2017′ t-shirt. I drove back up the road a mile or so, then pulled off on a dead-end farm road where there were about eight other cars. I parked across from a family in a van covered with evangelical Christian stickers, then gave my spare specs to a family from Eugene who hadn’t been able to find any. “If you phone Walmart, they say, ‘Welcome to Walmart; we have no more eclipse glasses.'”

It began slowly. I wouldn’t have noticed, except a few young folks down the road a ways began whooping. It took about an hour for the moon to cover the sun. Kiwi & I sat in the car. I occasionally looked out to see the disc of the moon creeping across the face of the sun.

When the light began to change, and the warm day suddenly cooled, I left Kiwi in the car, put on my hooded sweatshirt, and wandered out into the adjacent field. I’d like to have seen the umbra approaching, but didn’t like my chances, since the shadow would approach from the west, and the eclipse was in the eastern sky (≈9:15 PST). Also, I didn’t have an unlimited vista, and it was approaching at nearly 3000 mph!

It got eerily dark. Dark sky. 360º sunset. A contrail appeared west to east behind what I think was Alaska Air’s eclipse plane. The south wind, which had been blowing steadily all morning, stopped. A flock of birds flew back to their roosts in the trees. I could hear crickets. The few cars still on the road pulled over and stopped. The world was strange. The light was ‘wrong’.

I looked at the sun thru my glasses. Saw a thin crescent. The beautiful ‘diamond ring’ appeared.

The sudden darkness alarmed me. It was eerie. Disquieting. Unnatural. It was awe-full. I understand why people scream, though no one did. I wished I could. Perhaps the 3000 mph wall of shadow slammed into us too fast for us to react. It took my breath away.

I looked up. The sun had been punched from the sky. The corona was unworldly beauty. The sight was unnerving.

Venus shone directly overhead in a deep indigo sky. The sun was an empty disc edged in glory. The fields, the cars, the people, were from another planet.

I looked around at a sky and a world that wasn’t mine. An extraordinary two minutes on an alien world, under an alien sky. It was a little like being underwater. A shadowland. The Realm of the Dead.

Suddenly, the light came back. It was still ‘wrong’, but getting brighter by the minute. We witnesses exclaimed at each other, using words that couldn’t begin to describe the experience. The woman in the ‘Jesus Saves’ van told her children that this was all the doing of their god.

Indeed. If not her specific god, then another. (Helios. Aditi. Brigid. Apollo. . . .)  Any damage that may have come in the wake of this cosmic event would have, by insurance companies, been declared an ‘Act of God’.

And what a divine act it was.

The cosmos created a sacred rite. We initiates, volunteers all, brimming with excitement and hubris, were, in an instant, banished into the underworld. Amazed, fearful and trembling, we looked around us in awe and disbelief. Then, by the grace of the cosmos, we were resurrected back into life. Born anew into the world of light.

It took two-and-a-half hours to drive back to Milwaukie. And an extra hour in heavy traffic to drive to Port Angeles the next day. Then a five hour wait to board a ferry.